The Fort River is a 13-mile-long mainstem that flows East to West into the Connecticut River in western Massachusetts. Twenty-five fish species occur in the Fort River. The native fish community has 16 species, which is likely the same as occurred historically. In addition, nine non-native species have been introduced. Twenty-two species are freshwater riverine fishes and two species (sea lamprey and American eel) are diadromous, e.g., migrate between freshwater and saltwater, or vice versa) during their life history.

During the spring to fall seasons in the river, aquatic invertebrates are drifting downstream and migratory fishes are moving up-and downstream. These migrations are poorly understood.

Three major tributaries to the Fort River originate in cold spring headwaters in the local mountains. Thus, during spring to fall, there is a temperature zonation between the cold headwaters and the warm mainstem. This temperature zonation creates a zonation in the fish community with cold temperature dependent (stenothermal) species, like native brook trout and slimy sculpin, restricted to the headwaters and upper reaches of tributaries. There is also zonation of rocky habitat in the Fort River with rocks abundant in headwaters and in the upper ½ of the mainstem but absent as an ecological factor in the lower ½ of the mainstem where slope decreases and the bottom is sand or clay in the historical Connecticut River flood plain. Zonation of rocky habitat causes seasonal changes in fish distribution, particularly during spawning, when some fish species migrate to rocky reaches to build nests (examples, fallfish and sea lamprey). Abundant mixed decideous/evergreen trees in the riparian zone along the Fort River shoreline create a shaded stream corridor that provides stream cooling during high summer temperatures. Abundant vegetation and woody debris in the river provides abundant forage for the many aquatic insects, which are at the bottom of the food web utilized by native and introduced fishes.

The Fort River has a dynamic stream ecology caused by two factors: 1) riparian trees, and 2) stream flow. Trees that fall into the river corridor alter local water vector velocities and can quickly (in a few days) change the existing stream ecology from one type to another (for example, trees falling onto a riffle can change the reach into a run and pool). River flow is very dynamic, quickly changing ecological conditions after a major rainfall event. Typically, the Fort River rises quickly after major rainfall events and during snowmelt.

Sea lamprey research – Boyd Kynard has been studying the anadromous sea lamprey in the Fort River since 1981. Research on adults has focused on spawning ecology, spawning behavior and establishing index reaches for counting adult nests to correlate with adult abundance counted at Holyoke Dam. Research on larvae has focused on identifying residence time (#years) that larvae live in the river before migrating downstream to the Connecticut River. 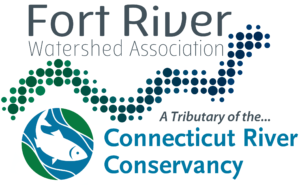 Your support hard at work on the Fort Nov 2021

What we learned this summer on the Fort River, and how you can help Nov 2020